The third edition of SoCraTes, in the Castle of Rochegude just ended. « So » stands for Software, « Cra » for Craftmanship and Tes for Test. There was around 70 people this year.

I heard of it through Twitter but never bothered to go, as I didn’t really know what it was like and Sofware Craftmanship not being amongst my main interests anymore (I’m a Product Owner and an IT Manager). Nevertheless, as another manager very highly recommended it to me, I became curious and wanted to figure it out.

Although it takes place in France, the conference is 80% in English because it’s an international conference. English is the official language, so that anyone can understand. There were people from Canada, Poland and Germany for example. It was a bit awkward to speak English with French people, especially when there was no foreigners around. You never know if anyone will pass by and if people speak in French, he won’t have the opportunity to jump in. It would also be possible to switch back to English when someone comes, but then it would be like it’s an inconvenience when it happens. That’s not welcoming.

The SoCraTes conference had no program : it was an open space format. The sessions are built in the morning during the first hour, based on the suggestions of the participants. People wait in line and present it to everyone. 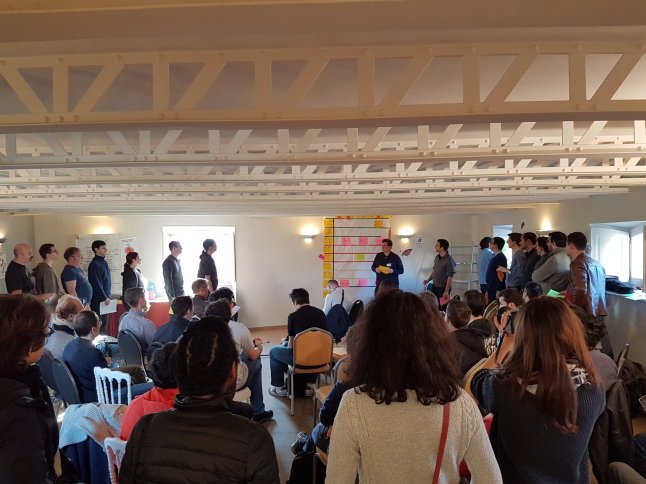 There’s not even votes on the sessions. If someone want to talk about something, he/she just put it on a slot. You can also put Questions or Issues you’d like to share. Although this kind of format can seem risky, it’s more and more used. It’s like you’re having a coffee with someone. If you don’t take value nor bring value, the law of two feet make it acceptable for you to leave the session for another one, that will suits you best. I have been to other open spaces, but that one was the best settled, I never felt bad for leaving a session.

You can be either behave like a bee or a butterfly. Bees like going from flower to flowerwhereas butterflies stick to only one. I tend to see two different sessions in one hour.

Apparently, the meetup Software Craftmanship in Paris also use this format during their meetings. Indeed, many participants of Socrates were regularly going to that meetup. Many work at Arolla, although there were also people from Zenika, Orange, Octo, Soat, Babbel (Germany), etc.

Moreover, anyone was an organizer. You create your own badge for instance.

And now everyone is introducing his own badge during 30s#socratesfr #icebreaker pic.twitter.com/Tops5FHjoF

Therefore, if something annoyed you, you were free to fix it. 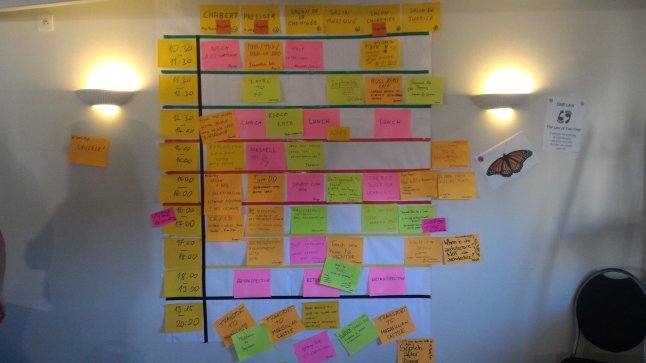 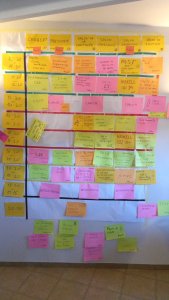 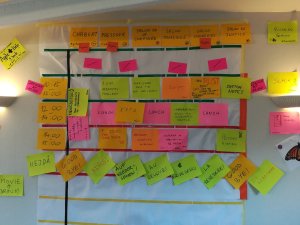 Here are a couple of repeat topics during these almost 3 days of open space : 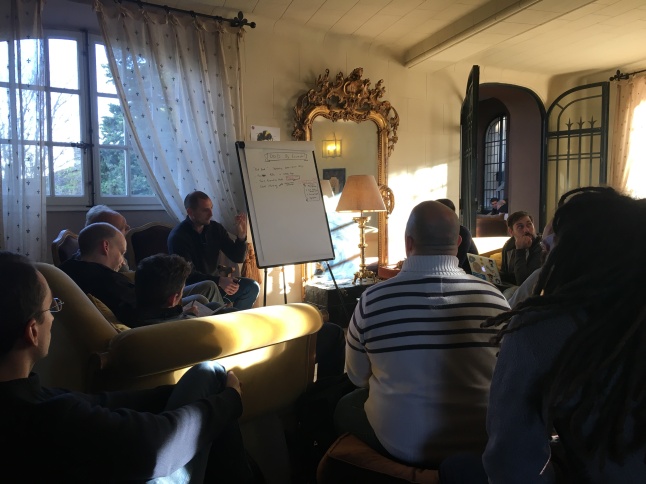 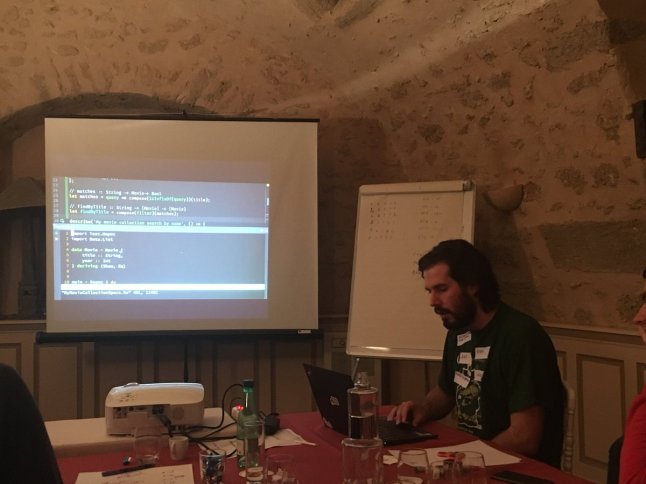 I also attended the first part of a session about Evolutionary Design by Adrian Bolboaca (@adibolb). The idea is to grow the software very iteratively, one concept at a time. You can have an outside in method with a guided test with general expectations and very more focused unit test testing one thing at a time. The analogy with the plant is to add just enough water to help it grow, without drowning it. 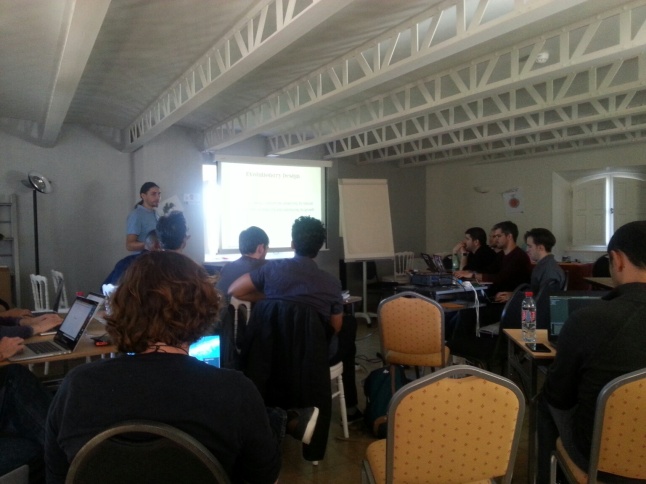 There was also a few topics about soft skills like « How to give a clean feedback » or « Teach me how to mentor« . I wish I had suggested a session on « How to hire developers » as well. 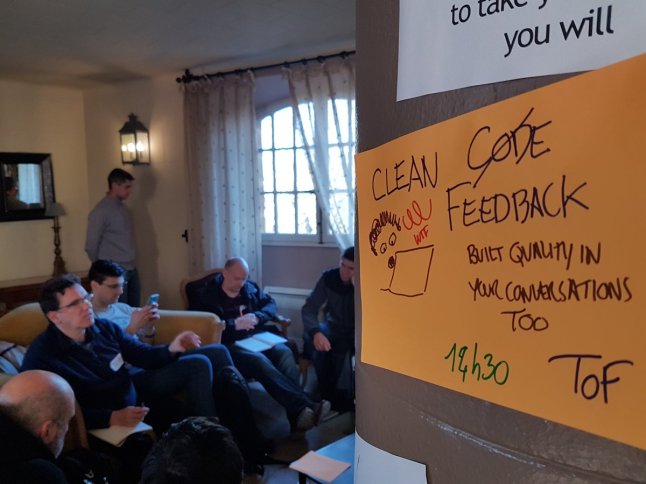 Perpetual Infancy – why software doesn’t seem to be growing up

This session from Laurent Bossavit (@morendil) was one of my favorite. It was about history of languages and « refactored » facts on IT. 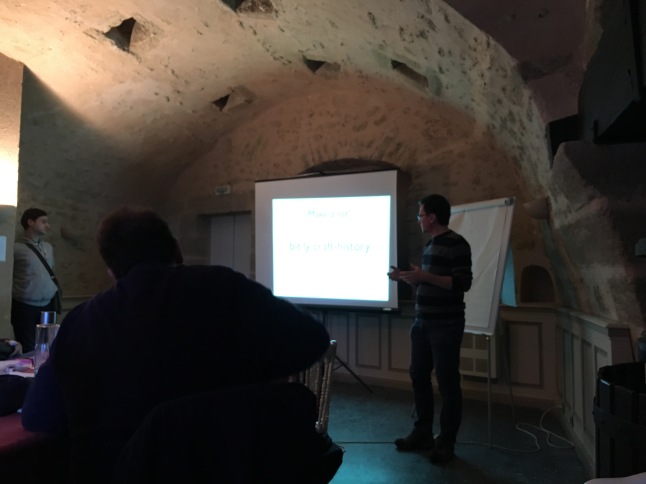 Laurent and J.B Rainsberger shared some tips about consultancy. I particularly liked the Commitment Test, where you ask for a little thing to the client before you go further. The idea is to avoid wasting time on missions where the client is not willing to change anything anyway, and just want to show that « he tried something ». If (s)he’s not willing to make that little effort before it starts, (s)he’s not ready for the even bigger changes that are coming when the mission will start. It can be as simple as asking to answer an opened question in a form.

When you’re designing at your best… you’re like what ? asked Christophe Thibault (@ToF_). The idea is to help the person to introspect better, and help him/her extract metaphors so that (s)he can have a better understanding of the situation. It’s not really about you understanding the other person’s situation. Basically, the coach repeats exactly the same words, without interpreting or reformulating anything so that the original idea stays 100% faithful to the person. And then you can as « What kind of…?  » or « Is there anything else about …?« .

The organizers also asked for feedback all along, so that it could be corrected as soon as possible. There was a retrospective at the end of each day.

A few days before the event, we chose our meal on the Internet. As a vegetarian, I really appreciated the fact that it was clearly mentioned. There was also vegan, pecastarian, meat, gluten or lactose free choices. 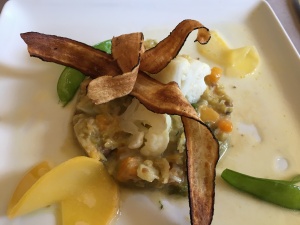 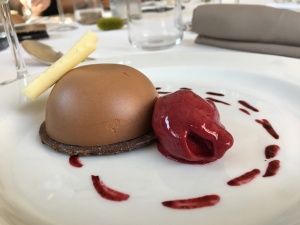 So the first day, I wondered how they would deal with that : would I find my name on a chair ? No. You just sit. Then a organizer walk around looking for the people with specific requirements. They would put a colored dot on the chair so that the waiter would know.

The second day, the system changed because the dot didn’t worked as well with 70 people than it used to with 40 people. We had to pick our name and put it on the table so that the waiter can more easily find us. 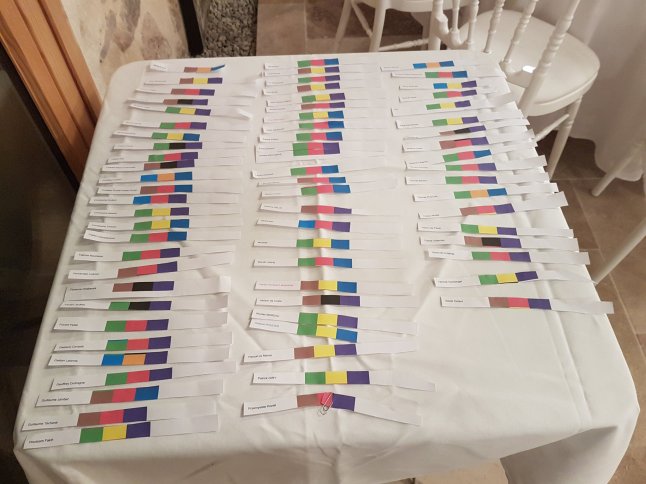 Final change : at the beginning of the meal, the waiters wrote down our colors so that the dishes could be served at the same time for the whole table. Houra to continuous improvement.

By the way, seeing how the facilitation was done by Adrian and how remarkably the organization was run thanks to Houssam was full of lessons. 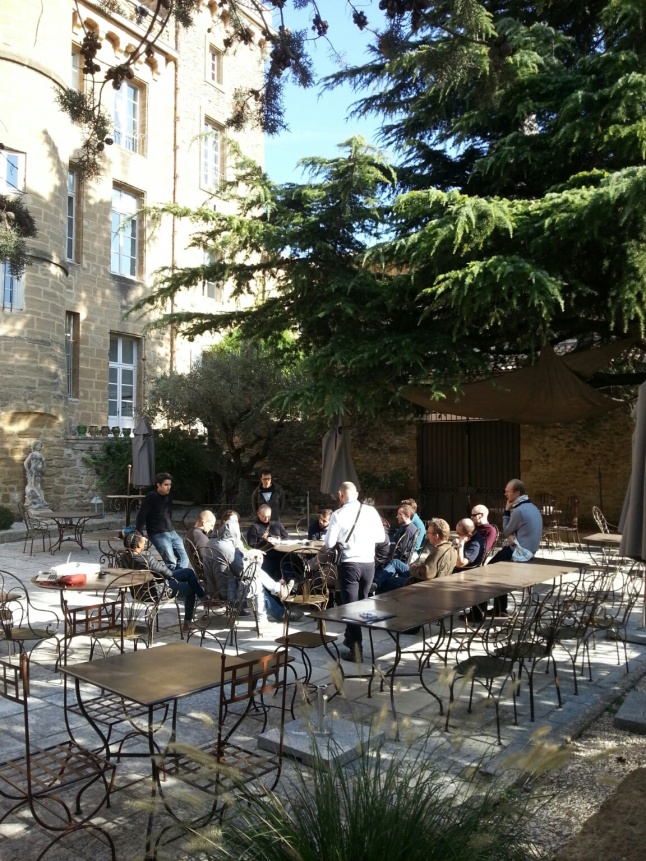 I actually got the most value out of the discussions during the free time that from the sessions itselves (although they were quite good). Sarah, Alexis, Nadia, Raphael, Cédric, Tobias, Pascal, Geoffrey, Stefan, Jana… I don’t even know everyone’s name but the mindset of the participants were really cheerful and each person’s story was very valuable. As Michelle said, SoCratTes is like Erasmus all over again.

Thanks again for the awesome moments. 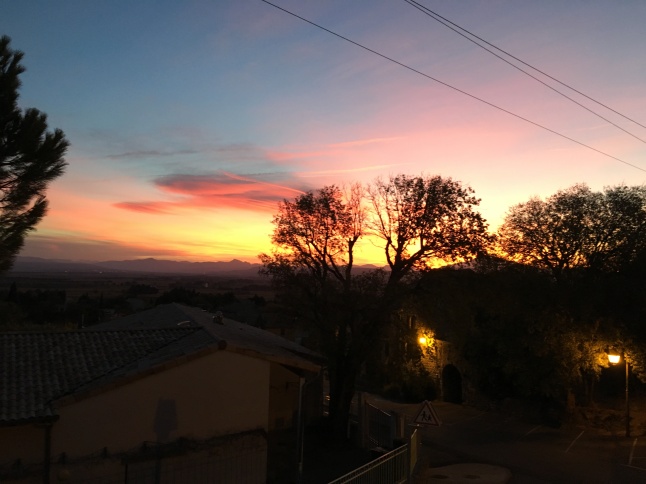 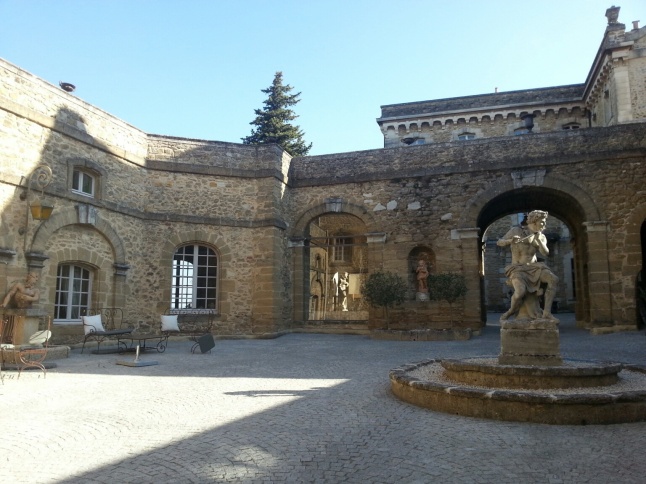 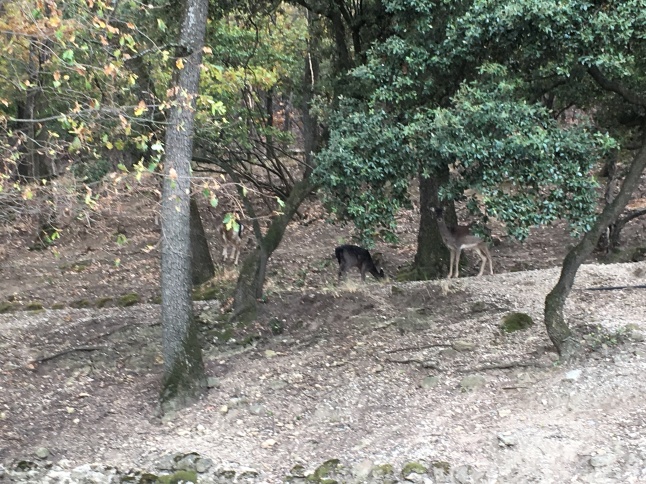 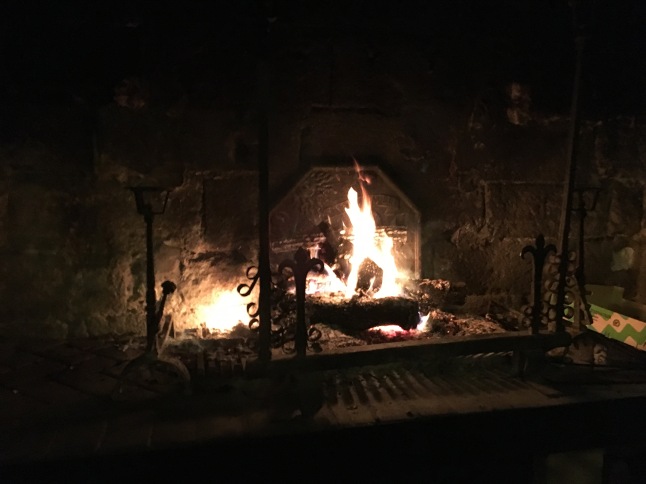